We wish you a pleasant reading in the study of the following pages, 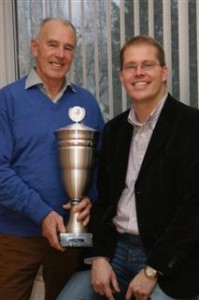 We like to make you note that the website will be updated regularly, So enough reason to visit the site frequently. You will find here everything about the series of top pigeons and top results of Wim, Alie, Maurice and Iduna and the latest generation of little fancier Annemijn and Carlijn.

Naturally, the website will be constantly updated and we will provide you with interesting novelties informed houden.We give you a look behind the scenes of the success story of the family Van der Kruk and will thus hopefully suggestions on doing to myself successful to be able to be.

In addition, we will keep you informed with the latest news in the future. Under the link "News" you experience everything about: actions, care, preparation, coupling, prestaties etc.. In short, you will be briefed on the ins and outs of the family Van der Kruk.

Father and son William Maurice van der Kruk from Tiel have been a household name in the sport. It started in the 80s, just after the start in Andelst. The move to Tiel 1985 has only had a positive impact on the performance of the duiven.Wel they have the pigeon colony regularly reinforced toppers from within- and abroad. Hence they anno 2008 enjoy great reputation in the Netherlands and beyond. Frequently they are found on Teletext and in the pigeon magazines, Despite the unfavorable location of Tiel in Section 7 Central Netherlands.

In 1980; while living in Andelst the first contacts were recorded with local pigeon fanciers. And the first “freebies” were a fact. The fact that these “freebies” still in the pedigree of the current toppers are reflected immediately so meant in '80 a hit. A flying start 1981 with a first and a second prize at the first two flights which were attended did the urge to taste and glory of victories only increase. Purchases of cracks in the region during the years 1984 to 1987 along with having two excellent breeding hens were responsible for the performance of various results in big bang. The move in 1985 Tiel was found 1986 to have on the colony witness not adversely affect the 4! victories in the LCF Teysterbant; then 500 membered.

A search for better pigeons resulted in 1990 a trip to Aalsmeer. Cor Buis (in the early eighties while playing under the name of Tube-Pike- Aalsmeer) was the one that was followed a few years. In the autumn the first toppers were, or rather summer boy from the top, Tiel. This after Cor Buis behind again had a monster season. The final race: St. Ghislain Hornu, 5.868 duiven in concours, price 1-2-3-4-16-18-24-32-33 etc.

That the initial purchase of 1990 one hit was soon found. Of “Tornado” NL 91-1771991 led to a victory in the LCF Teysterbant on Houdeng against 5.565 pigeons. During 1991 were a number of times visited Cor Buis. Young pigeons of various toppers: “3333”, “Belgian 340″,” The General”, “Costly Link”, etc.. were accompanied with the necessary advice to the Papesteeg in Tiel. In 1992 was again the journey to the Aalsmeerderweg in Aalsmeer made and the “Small Belg” in of “Belgian 374” boy came to Tiel. The last purchases were on the, total sales of Cor Buis from Aalsmeer. Now Wim and Maurice knew what pigeons which are capable of this sale was for many thousands of dollars seized absolute top pigeons. De NL 87-2542221 a daughter of Young Couple Peer van Gompel and mother to many top pigeons moved with her daughters NL 92-2668313 the 2 once won the 2nd prize Amsterdam Department !! Tiel. As a son of “The Little Belgian 376” and a daughter of “The General”. Also toppers Ger Hammers from Heiloo and Steef Duin Heemskerk were 1992 added to the culture stable. 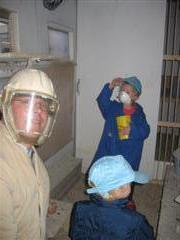 Plans for 1995 were great, totdat Wim in september 1994 had acute for hip surgery at the hospital. Besides the busy work of Maurice accompanied the decision to leave the parental home, have led, after much deliberation, the decision was made. Time, the coming years is available, is not sufficient to continue to perform at this top level. At the peak, even with big plans for the future, the bullet went through the church. Total sales of all breeding- and racing pigeons . The total sale was not as successful as it was expected and 28 pigeons of the total colony of 139 pieces was no interest. This' surplus’ Sales were wintered, and it was for Ali and Maurice manageable to provide necessary care these small colony. Friend and foe and the van der Kruk was surprised when the first of the best results of the season 1995 appeared on paper. It was just as hard if not harder than previous years. With highlights of the season 1995 Autowinnaar R Department at Roye against 5.639 pigeons. The number of first prizes were credited to konto 11 pieces!!

William snapped during 1995 good weather and so on, the wire was again picked up with the build-up of the winners colony. A voucher from the combination Admiral-Padding from Sleeuwijk provided the following reinforcements. Besides the pigeon on the receipt NL 96 -2668405 ( Won 1e prijs Bourges in 1998!) came during the summer boy all breeders with the bloodlines Zoontjes pigeons through H&O Nieuwendijk. Louis van Loon via the bakers Jan van Hassel and son from Wernhout and of course their own toppers Jan Admiral. Also a voucher of Ad V.D. Wheel & Daughter was plated and also went some pigeons from the line of “The General” along to Tiel. Also, a visit was made to the User. Sayaka level.

The strategy was turned off and all disciplines except the overnight become its sights. In 1997 in 1998 the boy firmly gains the mill, which resulted in 9 1e prices 1997 in 8 1e prices 1998. Met in 1998 twice Teletext: 2e prijs N.P.O. Orleans old with the "Shale Jack’ and on the Junior Derby Orleans 8th NPO price. Department 7 Central Netherlands. The acquisitions of the total sales of Riveter & Zn from Utrecht and Peter van Osch from Zutphen have resulted in successful crossings. Met o.a. annual statements and teletext 1999 1st and 2nd Ace Pigeon Young in Section 7 Central Netherlands. In the winter of the year 2000 Contacts have been made with the Fondspiegel matadors father and son Boijen from Schinnen / Nuth, to include on the overnight successes book to go. During the season 2002 have the first yearlings test successfully passed. After successful seasons 2003 in 2004 the distance pigeons successfully sold through public Duiven.net. Among those long distance pigeons were now several 1st prize winners present.

Meanwhile, the results in the Netherlands and Belgium were closely studied and some were lovers on the list to visit fanciers put. 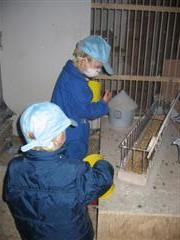 Cor and Harrie Leytens were visited and the impressive visit to the men in Oostelbeers resulted in a series of top pigeons from the best breeders of Leytens brothers in 2002 in 2003 were added to the colony of Van der Kruk, o.a. uit de '2e W. K.', a sister of the "Lammert’ and a sister of 'Reneris', children 'Pedro', 'Blue Jacket’ and the parents 'Jeannie'. Reeds in 2004 this resulted in winners and Ace. Also in Dordrecht was a visit to Kees Bosua, Peter van de Merwe and Piet van de Merwe. In 2003 pigeons came from Peter van de Merwe from the 'Blue Crack', ‘Gwen’ and Spike’ Tiel. Piet van de Merwe came, turned out, a few breeders to Papesteeg the best of Piet. There were quite a while until the summer of 2004 wait, but it was worth waiting for!. A full sister of 'Miss Troyes', cultivated in 2005 already the best youngster, and a daughter and a son of 'Femke’ were added to the culture stable.

In addition, there was swapped with Cor Buis / Hilly Roman of the good old Cor tube type and tube Jr. now playing a champion at the old address Cor sr.

A visit was also brought to the flying schoolmaster in Roosendaal, Rinus van Gastel, in the autumn 2003 a few specially bred champion had done little sitting. Obviously the 'Rocket’ blood in the veins. This from the pigeons in 2004 with great success and with great interest for a generous amount sold.

Year 2003 was another year in row Combination Visscher from Glanerbrug which sample results were achieved and national championships alswel Ace were achieved. The breeders were in 2003 pigeons to Tiel. in 2004 in 2005 pigeons were exchanged and produced by both successes. Comb. Visscher won a 6th and 8th NPO plus Teletext with 100% van der Kruk. In Tiel a top hen was discovered between the boy who came from Glanerbrug to Tiel.

The quest for exceptional pigeons in autumn 2003 in 2004 yielded reinforcements in 2005 Anton van & Hilde Reynaert record 5 children Figo. When Leo Heremans were at the then successful tandem Heremans-Ceusters from Olympiad, Wonderaske, Jan, Bookmark and Euro lines pigeons from. But also in the Netherlands a few sympathetic fanciers were discovered’ Frans Timmermans in Wehl with his now famous "Camelion Bonfire’ and Cees Terschegget with his' Super 635’ real classroom bins and pearls of top pigeons in the pigeon. Overall a solid foundation for peak performance.

Both his children come from Olympiad pigeons from Gust Janssen and Rudi Diels from Beerse to Tiel in 2009 take care for offspring and perhaps surprises.

The beautiful garden lofts with a length of 18 meters down during the racing season 24 and widowers 12 hens, distributed over 4 lofts 2 at 2 meter, to the fight on short, middle distance and long distance races to go. A number of such 75 youngsters ensures the rejuvenation of the colony and not forgetting chain results.

Of course, the sight remains keen to pick suitable reinforcements or rather to look.

A summary of the best wins :